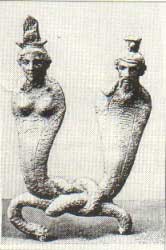 Someone asked after an English translation of Musil's poem "Isis und Osiris," which I could not find and, instead, tried my hand at one for the occasion. It is an important poem for me, and for Musil. He wrote in his notebooks that it "contains the novel in nucleo".  Isis and Osiris are, of course, the sibling lovers of Egyptian mythology who are cruelly separated when Osiris is cut into pieces by their jealous brother Set. Isis looks all over Egypt for the parts and is able to breathe them back to life. Except for his penis, which was eaten by fishes; she fashions one out of wax and adheres it to her lover/brother. Now Musil, as you will see, has kept some of the original elements and changed some others, but the mystical union of brother and sister, like and unlike, separate but united which plays out between Ulrich and Agathe in the novel is clearly embodied here, as is the fleeting and circular nature of the sexual, erotic, romantic experience. The sun and moon (Isis and Osiris) separate and come together, repeatedly, are wounded and healed, are hungry and satisfied, over and over and over again.  You will also note that the male is the moon and the female the sun here, which corresponds to the gender of the two nouns in German (der Mond, die Sonne). Le voila!

On the foliage of stars the moon
Boy in silvery rest withdrew
And the hub of the sun's wheel soon
Turned and looked at him anew.

From the desert the red wind wails.
And the coasts are  empty of sails.

And the sister quietly loosened
The sleeper's sex and devoured it.
And she gave her soft heart, the red one,
In return, and laid it upon him, upon him.

And in the dream the wound healed over.
And his sweet sex she devoured.

See how the sun thundered away
As the sleeper was shocked from sleep,
Stars swayed, like ships,
Shaking trees, if they are chained,
When the great storm begins.
See, there his brothers stormed
After the lovely thief,
And he cast his net out.
And the blue space broke,
The woods broke under her tread,
And the stars ran along in dread,
But the tender birdshouldered one
Could not be caught by anyone, no matter how fast.

Only the boy she called to at night
Finds her, when moon and sun exchange.
Of all the hundred brothers, only this one,
And he eats her heart and she eats his.