Posted by Musil Attempts at 1:56 PM No comments:

Burton Pike is this year's prize recipient of the prestigious Helen & Kurt Wolff Translator's Award (see <http://www.goethe.de/ins/us/lp/prj/wol/rec/2012/en9339133.htm>) for his translation of Gerhard Meier's novel, Isle of the Dead, which I have discussed below in a number of posts. It is, indeed, a beautiful book, and Burton Pike deserves this award for this book and, moreover, for his brilliant translation of  voluminous sections of the Musil Nachlass (and his invaluable introduction and editing) in the epoch-making 1995 2-volume Knopf edition of The Man without Qualities,  for his translation (with David Luft) of the collection of Musil's  essays under the title Precision and Soul, and for his recent translations of Goethe's Sorrows of Young Werther and Rilke's The Notebooks of Malte Laurids Brigge. In addition to his achievements in the world of translation, Burton Pike is also a formidable and brilliant scholar who introduced Musil to the English-speaking world with the publication of his Robert Musil: An Introduction to his Work, in 1961, and who, since then, has written countless essays on Musil, including most recently,  "Der Mann ohne Eigenschaften: Unfinished or Without End?"  in A Companion to the Works of Robert Musil (Camden House, 2007). He also wrote The Image of the City in Modern Literature (Princeton, 1981) and has continued his work on the city in literature over the last decades.

What many people do not know is that Burton Pike, as professor emeritus of Comparative Literature and Germanic Literature and Languages at the City University Graduate School and University Center, was also an incomparably amazing teacher and mentor for countless students (including yours truly). He introduced us to a world of cultural complexity and depth with grace, clarity, and sophistication, with a sense of humor and humility, and a sense of humanity, that may be endangered species in today's world  of  posturing and competition. Burton Pike  always maintained the highest of standards as a professor, but with a kindness, generosity and an openness to new ideas and fresh perspectives and always with an eye for what really mattered; and he devoted himself tirelessly to engaging in meaningful dialogue with his students about ideas, cultural and philosophical contexts, and about the process and practice of writing, and continues to be a beloved and indispensable mentor to me, and surely to many others, in our continuing attempts to write, research and to  negotiate the world of scholarship and academia. 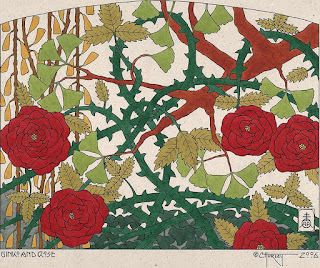 Congratulations, Burton Pike!  It is about time you received this award! May there be more and more praises and thanks for all you have given the world!  Here, I cast a virtual bouquet of roses at your feet (with ginko leaves interspersed, for ginko is supposed to be good for the brain)!