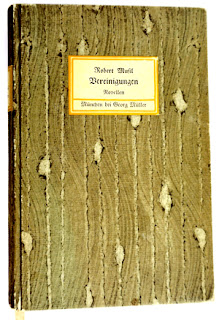 I have recently finished a new translation of Musil's novella collection, Unions (Vereinigungen), which only appears in English in Wilkin's and Kaiser's collection called Five Women. Originally, in German, it was its own book of two novellas, and the other stories in the English collection were printed in a book as Three Women. One of them, coincidentally, "The Portuguese Lady," is currently garnering some new attention due to a new independent film based upon it, which is making the rounds of the film festivals. Aside from the minor problem that Five Women grouped the two novellas of Unions together with the unrelated stories of Three Women, I came to feel that the Kaiser and Wilkins translation of Unions left much to be desired, and called for a fresh eye. These two early and very experimental stories of Musil's, entitled "The Completion [or Perfection] of Love" and "The Temptation of Quiet Veronica," are quite difficult to translate and also sometimes somewhat shocking or challenging to conventional morality. While Wilkins and Kaiser are very worthy translators, who have come up with some ingenious solutions to some of the more thorny passages in the stories, they have also normalized the stories, both in terms of their experimental prose style and in terms of their content, even to the extent of mistranslating a few key passages which they must have found too disturbing to render correctly. I will not, however, go into detail now, as all of this is explained in full in the translator's introduction, and the book should be out, with Contra Mundum Press, by the Summer of this year. The book's first story, "The Completion of Love," will also be featured in Fiction Magazine this Spring. But I will provide a few short passages below, just in time for Valentine's Day, to give some idea of the richness of the writing.

The next project is a bit more ambitious and involves the collecting and translating of Musil's plays and writings on theater, and will come out with Contra Mundum Press (again) sometime in 2020. Some excerpts from this book will be published in the upcoming Columbia Journal.

Also, a translation of Klaus Amann's Robert Musil:Literature and Politics, an extremely relevant offering of Musil's writings on the role of the writer amid the rise of Fascism, along with a marvelous commentary and introduction by Amann, will be published in 2019, with Fomite Press.

Here are some excerpts from Unions. First, a passage from "The Completion of Love":


“You really can’t come along?”
“It’s impossible: you know I have to work now to come quickly to an end.”
“But Lilli would be so glad …. ”
“Of course, of course, but it cannot be.”
“But I have no desire to travel without you ….” His wife said this while she poured the tea, and she looked over at him, as he sat in the corner of the room in a brightly-flowered armchair and smoked a cigarette. It was evening and the dark green blinds looked out toward the street, in a long row of other dark green blinds, from which nothing distinguished them. Like a pair of dark and serenely closed eyelids, they hid the radiance of this room, in which the tea poured now from out of a tarnished silver pot into the cups, touching their bottoms with a soft ring, and then seemed to grow still in its own lustrous streaming, like a twisting, transparent shaft made of tawny, light topaz …. In the slightly dented surfaces of the pot were shadows of green and grey hues, also blue and yellow; they lay quite still, as if they had flowed there together, but could not continue on. From the woman’s arm rising from the teapot, to the look with which she gazed at her husband, a transfixing, rigid triangle was drawn about them.
Indeed, it was a triangle, as one could see; but something else too, something almost physical could be felt by these two people alone inside of it; to them it seemed as if its trajectory spanned between them like a brace made of the hardest metal, holding them fast in their places and yet binding them together, even though they were so far apart, into a unit, which one could practically feel with one’s senses ... it buttressed itself in the pits of their stomachs and they felt the pressure there ... it lifted them upright from the armrests of their chairs, with unmoving faces and unwavering glances, and yet they felt a tender emotion there — something quite light it was — as though their hearts were fluttering in and out of each other like two swarms of tiny butterflies ....


The whole room hung on this thin, barely real, and yet so apparent feeling, as on a softly trembling axis, and then on the two people upon whom it depended: the surrounding objects held their breath, the light on the wall froze into golden lace ... everything was silent and waited and was there only for them; ... time, which ran through the world like an endlessly glittering thread, seemed to move through the middle of this room, and seemed to move through the middle of these people and seemed to suddenly pause and become rigid and still and glittering ... and the objects moved a little closer to each other. It was that stillness and then soft kind of sinking, as when surfaces suddenly arrange themselves to create a crystal ... and these two people, through whose midst it ran, suddenly saw each other through this holding of breath and this curving and leaning of everything all around them, as if through thousands of mirroring surfaces, and saw each other again, as if they were seeing each other for the first time ....

And now, an excerpt from "The Temptation of Quiet Veronica":


In those days she had loved the fur of a large St. Bernard, especially the fur in the front where the broad breast muscles protrude with every step from its arched bones like two hills. There was such an overwhelming mass of hair and it was so golden brown, and it was so much like some incalculable richness and a soft boundarylessness, that her eyes became confused when they let themselves fall gently on even the smallest patch. And while she felt nothing more than a single, whole, strong feeling of liking, that tender camaraderie that a fourteen-year-old girl feels for a thing, it was almost like being in a landscape. As when one walks, and the woods are there, and the meadows, and the mountain and the field are there, and in this great order everything fits so simply, like a pebble, each thing frightfully in place. When one looks at it by itself, cautiously alive, one suddenly becomes afraid amid the awe, as if before an animal that crouches and lays motionless and waits.
But once, as she lay like that next to her dog, it seemed to her that this must have been the way giants were; with mountains and valleys of fur on their breasts, and song birds swinging in their hair, and little lice that sat upon the song birds, and — she did not know any further, but it didn’t need to have an end, and again everything was so connected, one thing after the other, and one thing pressing into the other, so that everything seemed to stand still out of an awe before all the power and order. And she thought secretly, that if the giants were to become angry, everything in this thousand-fold life would shoot out, screaming, in all directions, and deluge everything with a frightening fullness, and if they were to descend on someone in love — that would be like someone stomping down from the mountains and swooshing with the trees, and small waving hairs would grow on one’s body and creeping insects, and a voice that screams in bliss about something wholly unspeakable, and her breath would have to wrap it all inside of a swarm of animals, holding it fast.


Posted by Musil Attempts at 12:05 PM No comments: