Rilke's Notebooks of Malte Laurids Brigge & the Uses of Alienation 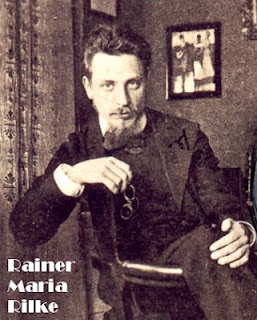 I just found this line from The Notebooks of Malte Laurids Brigge (translated by Burton Pike, 2008, Dalkey Archives):
"I still have not become accustomed to this world, which seems to me good”. This entry is followed a page later by a suggestion that art, poetry, writing could be the tools to escape from this hollow simulacrum of a world, into new, more meaningful worlds. Malte quotes from Baudelaire's Prose Poems, “éloignez de moi le mensonges et les vageurs corruptrices du monde” [remove from me the lies and corrupting vapors of the world]"(39).

For Musil, as well as for Rilke, the question of how to live in the world was not to be answered by coming to terms with the world as it is (or was), but as it could, would, should be in future and subjunctive modes. Thus, failure to assimilate to "this world" is a necessary step toward the successful affirmative creation of new worlds through new visions and new arrangements of possibilities.
Posted by Musil Attempts at 8:37 AM 5 comments:

Apropos the discussion below about the significance (or lack) of the social world of Kakania, of the parlour game,  I just discovered a few beautiful and relevant passages from Burton Pike's unpublished notes on Musil:

"What M. is always about, why he haunts: looking for a place the individual can fit in in a deadened, shallow world.  This is more important than his ideas, which are (in the essays) hortatory and not new, or indeed constructive, but hortatory to change; cf. Rilke, the goal of art is to produce in reader a moral imperative to change his life."

" The MoE is a book about withdrawal from the world. there are few others like it, which begin at a specific point and spread out without practical hope of reconciliation: Die Wahlverwandschaften; Heinrich von Ofterdingen perhaps."
Posted by Musil Attempts at 7:01 AM No comments:

As I was falling asleep last night, I thought more about Wolf's thesis and book (discussed below) and realized this obvious other point: most of the pages of The Man without Qualities deal with two people existing outside of society, in what Musil calls "the Other Condition" of experiencing, within their gated little castle, or enisled on various island paradises or, at least metaphorically, within their own minds. They exile themselves from the parlour game that seems to be the subject of Wolf's book, with good reason, and engage in pursuits that might be considered timeless or anti-social, but which do, indeed, have important bearing on the society and life which they have rejected. Perhaps Wolf addresses this in his book. I hope so; because the latter, anti-social part of Musil's novel is all too often relegated to a failed experiment, a sort of adolescent dream which Musil is supposed to have rejected, despite the fact that he spent over 4o years writing about it and exploring it, despite the fact that he was still working on yet another revision of a draft chapter about that Other Condition, that he had been struggling with for decades (" Breaths of a Summer's Day") the day he died. Ulrich's 1-year "vacation from life,"  begun from inside society, spins out and away from it, while, I believe, providing important insights about how, ultimately to live in it, change it, expand it to explode the games of which  it all too often consists.
Posted by Musil Attempts at 8:30 AM 2 comments:

ORF-Austria has just published (2/19/12) a lengthy review of Norbert Christian Wolf's new 1000+ page book,
Kakanien als Gesellschaftsspiel, which focuses on Musil's novel as a political and social analysis of Kakania/Vienna. According to the review, Wolf argues that Musil's depiction of Vienna presents relevant and sophisticated commentary on modern and post-modern Europe (Germany in particular). Wolf, in his interview with ORF, explained that "Musil prescribed to a concept of modernity which concerned itself with fragmentation, with a-simultaneity and with contradiction, and Austro-Hungary provided an attractive model for these things" . Further, Wolf told the interviewer, Gerald Heidegger, that "Musil [...] did not want to write a historical novel, but a novel that would be in a position to come to terms with the spiritual [i.e., cultural and intellectual] problems of its own times" .

While I have not (yet) read the volume, it is refreshing that, for a change, Musil's depiction of Vienna before the First World War is not described here merely as a picture of a moribund world that now is no more, as if all Musil's novel had to offer were a snapshot of what is lost (for a contrast see Hans Ulrich Gumpert's recent discussion of Musil in his Frankfurter Allgemeine Blog {1/21/12 : Digital/Pausen} which suggests that one of the reasons Musil isn't read as much as he should be is that The Man without Qualities  "is inscribed with every sentence into the world of the Austro-Hungarian Monarchy which, as the first victim of the First World War, disappeared forever in 1918". ) Instead, in Wolf's new reading, we see Musil's Kakania/Vienna as a contribution to a discourse about problems that are still unsolved today, problems of national identity, difference, assimilation, social and national antipathies, tension between power, money, and ideals, between the interests of industry and humanist values, and power struggles between ideologies. According to Wolf's reading,  Musil's Vienna, as a state of multiple ethnicities, as uncomfortable melting pot of multiple traditions and values, is another form of the Eigenschaftslosigkeit (lack of qualities or fixed characteristics) of the novel's title, not to be simplistically reduced down to simple or singularly recognizable features. As Heidegger writes, "This is where Wolf finds his material for analysis, for Musil, as he demonstrates, constantly sets his figures going amid  society's game rules". Further, "by intentional positioning or displacement on the game board of social fault lines, the players are led into new, genuine, modern conflicts and contemporary debates". While this sounds reasonable, and in harmony with Musil's experimental method, the review (though not the book, in all fairness, since I am only reading about a 1000+ page book in a 1-page summary) raises some questions for me, mostly in terms of focus and proportion.
It is not surprising that Wolf seems to be arguing that Musil's novel functions as a "genuine medium of social analysis," as the reviewer writes, and that, further, the novel "enables a sharper focus on social processes than [contemporary]classical scientific disciplines [like sociology or political science] (which were not, at Musil's time, particularly highly developed)". Musil was probably one of the must capable observers of all phenomena (social, political, aesthetic, sensory, psychological) of his time, but as can be expected of me here, I have to remark that his intention was to be a creative writer, not a social (or any other type of) scientist.  Further, these figures or players and the parlour or society game of Wolf's title, are really only present in Musil's unfinished novel in the very beginning of the book, more specifically, as parts only of the first three or four hundred pages of what was to be thousands and thousands of pages of published and unpublished material which notoriously left behind any and all discussion of the society of Kakania, the parallel campaign, the social parties, meetings, plans, and business arrangements. Musil literally lost interest or moved on from mentioning most of what seems to be the focus of this book, which is not, really, any reason not to pay serious attention to these earlier parts. It is just disconcerting when a review seems not to be aware of this and to present this one aspect as if it were a representation of the whole, or even of the most, of the novel's material. While of course anyone may reasonably spend as much time, energy, or pages as he or she wishes on any aspect of Musil's novel, this review at least (if not the book itself) continues a general tendency to emphasize the proportionally smaller (and to me less interesting) aspects of this extremely philosophically and aesthetically complex work of experimental fiction.

In a way, Klimt's early Burgtheater mural depicted above is a perfect image of the sort of Gesellschaftsspiel that Wolf's book seems to describe. And in the same way that Klimt's painting moved far beyond this early work in style and substance and depth, I might argue that Musil's work, his explorations of formal experimentation, his powerful poetological  arrangements of words and sentences, his metaphysical discussions, moved in a comparable direction far beyond realistic social commentary about the lives of the rich and famous or analysis of political intrigue. It is clear, however, even from Heidegger's 1-page review that Wolf's book does not examine the questions of politics or social games from a shallow perspective that ignores aesthetics. Despite what seems to be an emphasis on the socio-political, the review references Wolf's differentiation of Musil's novel from the demands of realism and his contextualizing of the novel within literary Modernism's aims.

All in all, one of the beauties of Musil's work is the infinitely extending possibility of choosing, selecting out almost any aspect and expanding and unfolding it at every point exponentially, as if any one idea were important enough to explore and connect with whole worlds of inquiry, even to write a 1000+ page scholarly work about! Talk about infinity!

UPDATE: I have since seen the actual book and have it on my desk waiting to be read in full, and the review definitely did minimize the scope and depth of the book's approach. There are, indeed, long and thoughtful chapters on Ulrich and Agathe's experiments, and on Musil's metaphysical and aesthetic concerns. When I get a chance to devote some time to it I will write a more comprehensive review of what looks to be a very important Musil book.
Posted by Musil Attempts at 8:22 PM No comments: