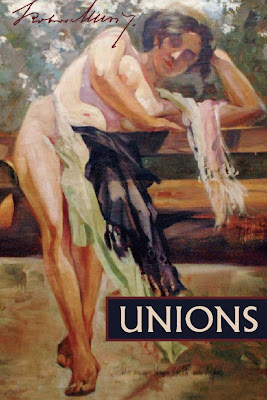 Unions: Two Stories, by Robert Musil, translated and with an introduction by yours truly, will be out on April 15th, the anniversary of Musil's death. Beautifully typeset and designed by Contra Mundum's Alessandro Segalini, our book is graced with a cover featuring a painting by Musil's wife, Martha, allegedly inscribed to the dentist with whom she conceived her daughter during her second marriage (to Herr Marcovaldi), an incident which is referred to in the first story of the collection. Both the stories in Unions were inspired by Martha's experiences and psyche, and, as such, I feel that this book, especially in our edition, is Martha's book, issued in her honor. I have also dedicated my introduction to my sister, Simone Ellin, and all the other non-biological sisters in my life. It is a woman's book, about women's desire, though written by a man. An amazing act of ventriloquism, translated into English and, I like to think, somehow, now, translated back into a woman's voice.

Mark Mirsky inspired me to translate these stories, with a query about the original text of the first one, and it will appear in his magazine Fiction, some time in the spring. Rainer J. Hanshe, Contra Mundum's driving force, sustained me through the difficult task in all its phases, supplying invaluable insight into questions large and small.

You can read the description and advance order here: http://contramundum.net/2019/03/17/unions/