"Will Transformation": A new Rilke Translation by Burton Pike Awakens Us! 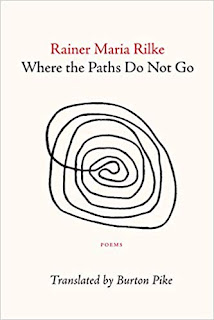 It has been two years since I have written here, having been occupied more or less meaningfully with other things, but today it begins again, having, in a real Rilkean sense, been always waiting there to be reborn, noticed, re-opened.
Burton Pike, Musil's consummate translator and herald, has dared to render a new translation of Rilke, a spare and serious collection, which erupts in sudden violent blossoms out of its careful respect for Rilke's consummate craftsmanship and his commitment to finding a language that could begin to approximate what it means to see new.
The collection, called "Where the Paths Do Not Go," after a line in a late poem called "Will-o'-the-Wisps," is gifted with a beautiful introduction that stresses the hard work that was required to "upend" German "as a poetic language." Burton Pike notes that many English translations do not "notice that the poems are not just beautiful, but the product of a hard, driving will that in German is evident in his mature work". Then the translator shares a passage from a poem Rilke wrote in 1908 for a young poet who had killed himself. In "Requiem," Rilke compares the work of the poet to that of a stonemason of a cathedral, who, "doggedly translates himself into the composure of the stone." This difficult transformation and difficult "translation" is a thread that runs through all of the poems, both in theme and form, as the poet struggles to transform new vision into new language to give birth to poems that are witness to the way in which all objects and persons are constantly in the process of changing state, becoming, dying, being born, undergoing metamorphosis through the medium of metaphor.
Musil, in his eulogy for Rilke, invoked the transformative nature of Rilke's vision and method, writing that in Rilke's poems, "Something is never compared with something else — as two different and separate things, which they remain in the comparison — for, even if this sometimes does happen, and one thing is said to be like another, it seems at that very moment to have already been the other since primordial times...The metaphoric here becomes serious to a high degree" (in Precision and Soul, translated by Burton Pike and David Luft). We have, in the poems here presented, a proliferation of objects, natural phenomena, tones, invisible forces like wind and thought, anthropomorphized, animated by intelligence, spirit, feeling, which is ordinarily not recognized to be present in them, while persons, parts of persons, angels, gods and goddesses are objectified, i.e., turned temporarily into objects, emptied out, hollowed of the spirit that usually is assumed to be their inheritance, alienated from their usual contexts. A flood of water, flowing over the blackened, bearded chin of a rock-face, is interrupted by the intrusion of a jug; flower petals want to lose the intensity of their blueness, then think again; Orpheus's lyre grows into his hand, "like rose vines in the branch of the olive tree"; Eurydice does not mind her lover's fatal glancing back, because "She was already root"; singing is a "high tree in the ear"; an invisible poem breathes....
The poems are often difficult, and difficult to understand, especially as the translator has taken great pains to leave open what Rilke has left open, not to fill in what has necessarily been left unarticulated in respect to the task: the approximate transformation into tentative form of something that is not quite fixed or fixable, something for which there is hardly a language yet. It is important not to mistake the magic of this metaphoric transubstantiation with an indiscriminate flowing of everything into everything, or anything into whatever. The approximation of like to almost like requires extreme caution and care, discrimination and selection, carving and cutting, an excruciatingly precise artistry. And Burton Pike's translation approaches the poems with an exquisite awareness of the necessity of exactitude in the articulation of that which is so fleeting and so difficult to grasp, an approach equally requisite to and present in his translations of Musil's kindred attempts.
Here is a poem, in Burton Pike's rendering, preceded by the original German, which has been lovingly included in this volume:

Will transformation. O be inspired by the flame
within which a thing that glows with transformations withdraws from you;
that designing spirit that masters what is earthly
loves in the figure's changes nothing like the turning point.

What locks itself in stasis already is the frozen:
does it think itself safe protected by the nondescript gray?
Wait, a hardest warns from the distance the hard,
woe – absent hammer is raised!

Who pours himself forth as a spring, him recognition recognizes;
and it leads him charmed through the cheerfully created
that with beginning often closes and with ending begins.

Every happy space is a child or grandchild of parting,
which they go through astonished. And Daphne transformed,
since she feels herself laureling, wants you to change into wind.