From Musil's "Story of a Regiment," based on his experiences as a soldier in WWI: "The night was dark enough to slice; anyone who groped between the houses cut with his eyes against the darkness like wood. Further off, where the field lifted, there were small dark yellow stars that gave off no light, but it was still somewhat better; a dull, uncertain illumination spread from out of the distance of space and diluted the night. Sometimes black bushes wandered slowly there in trenches or furrows or stood awkwardly still; patrols. Small messages crept or ran around the compound, signaled by the telephone’s tooting—as melancholy as the whistle of a steamboat arriving in the night. Out of these there synthesized a mosaic of small often contradictory reports, and from out of the night the enemy grew in the candlelight, as they stood across the great road to the north of the mountain, with their flanks pressed against strongly defended heights, working with feverish urgency on the arrangement of their formations. The attack was planned for the next day. But in the night the patrols reported that a fog had invaded. Then rain. The wind swept through the trenches and ditches like wet rags; then the fumes swept through the houses. Then the rain; then it stayed put in between the houses." This and other wonderful Musil pieces, previously untranslated, can be read in full in the new issue of Fiction Magazine, edited by Mark Mirsky. Mark, who edited Musil's Diaries in English, has been publishing Musil in his journal for over 25 years and published my first translations there. You can order of copy of this issue (and copies of other issues with Musil in them, translated by myself, Burton Pike, and others) on their website: https://www.fictioninc.com/ 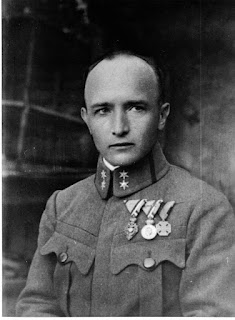 Or consider subscribing to this legendary journal!
Posted by Musil Attempts at 6:02 AM